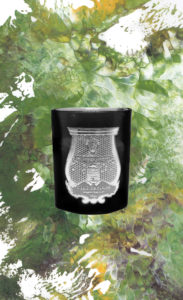 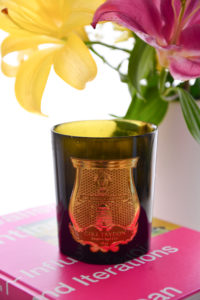 Cire Trudon, founded in 1643 in Paris, is the world’s oldest candlemaker still active today. I was curious to see what kind of time Japan was living in 1643 and I found out that it was at the beginning of the *Sakoku period(1639-1854) in the Edo period (1603-1868).
*Sakoku=The policy of national isolation during the Tokugawa Shogunate.

Cire Trudon began with Claude Trudon selling groceries and candles in the Rue Saint-Noré and went on to supply candles to Louis XIV and royal families, the Palace of Versailles and many French churches. The company continues to show its presence as a candlemaker even after the flow and changing of the times.
At France’s World’s Fair in 1889, the company’s candle-making expertise was recognized and was awarded a gold medal.

The distinctive emblem of the candle features the symbol of the “Bee’s Hive” as a tribute to the bees that have contributed to the brand’s prosperity and quality for hundreds of years and the coat of arms of Louis XIV as a sign of royal patronage.
The deep green glass container and the gold emblem express the glamorous presence and elegance of its brand. 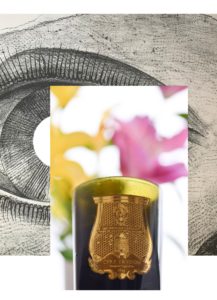 When I first heard about Cire Trudon, I was surprised to see the long history of the brand and at the same time, I was very excited to see what kind of candles French people have loved for hundreds of years.
Buying Cire Trudon candle was a bit challenging for me as it was not cheap but I’m so glad that I have bought it and I have learned so much about how I should understand the value of candles.

In the beginning, I was attracted to the brand’s long history and name recognition, but when I actually burn the candle, I was so happy with its quality. The ingredients are 100% plant-based, the wick is made of cotton, and as stated on the official website, the flame is stable, there is no smoke, and the wax melted beautifully with a beautiful scent.

The wax formulas of the Trudon candles are the fruit of specific developments which are the source of its exceptional olfactory and burning qualities. When correctly taken care of, no smoke leaves a Trudon candle and no wax is left on the sides of the glass.
Cire Trudon Official website

I personally felt that the scent was more of a clear-headed scent than a relaxing one. I think it could be a relaxing scent for some people, but because I was not used to this type of scent myself it was a refreshing scent for me.
Since the theme of the candle is “Dada”, I was drawn by it and enjoy thinking about what it means to break down stereotypes and create new art.

The scent was a mixture of a deep, astringent tea fragrance and fresh mint, eucalyptus and chamomile.

When I was colouring the scent, the image of the deep green colour of the glass container came to me first but as I saw colour blending beautifully, I knew I didn’t have the specific colours so it was a bit harder to paint as normal but I’m satisfied with the final piece.

I would love to try the other candles as they all have a theme in each candle and it sounds so interesting!